I cast a little spell on the dispensettes, the gizmos used to dispense a fixed aliquot of various somethings in the teaching lab.  Suddenly, O-rings are failing left and right.  The humans are blaming the harsh chemicals in the chromatography solvent, but we know better, do we not?

I have continued to use what I learned from my dimwitted thunder god of a sibling, making sure that even though there have been multiple days with massing black clouds and thunder, no more than a smattering of drops have fallen on the human female’s yard.  Just to mess with her head, I leave random amounts of water in the rain gauge–a quarter inch here, half an inch there.  Not a day goes by that she doesn’t pray for a real, soaking rain.  The weather mavens have been calling for a cooler, wetter weather pattern for fall.  “El Niño,” they call it.  They haven’t reckoned with “El Loki.”

I have meddled with the electronic door locks YET again.  It never gets old.  This week I had one of the doors adjusted so that it could not be opened from the inside or the outside.  True, there is a back way into the room which may be used for entry or egress, but it is most inconvenient, and a bit of a safety hazard, should evacuation become necessary.  Oh, and by the way, is that gas we smell in the very same room?

Then there was the Great Banana Incident of 2015.

Most of this has been but a minor annoyance to the human female, which is why I have something extra special planned for today.  See this browser history? 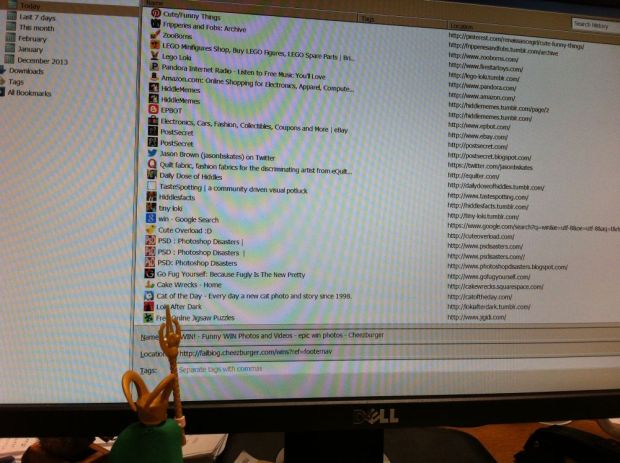