Look, Sigyn! It’s a parcel, and it’s addressed to the human female!

Oh, don’t play innocent with me. I know you want to! No, it’s not addressed to you or to me, but the human female has so many people who truly do not like her that we OWE it to her to, um…pre-inspect it and make sure that it contains nothing harmful. Yes, that’s it.

Does it say who it’s from?

Ah. Flourish–that’s the University’s touchy-feely outfit, the one that encourages people to breathe, exercise, get in touch with their inner moppet, and not be mad at the school for making them teach live during a pandemic. (Did I say that out loud?)

Well, let’s have at it. Good thing I always have a dagger handy.

Well, look at that.

It’s a slogan. Graphically designed, multicolored, and kind of cryptic. Who is supposed to be kind, the sender or the recipient? And who’s meant to be great, President Young (that’s his little message in there) or the human female?

I’m so confused. Is there anything else in the box? Surely there must be, or why send a package via Usually Smashes Parcels Significantly when an email would suffice?

Sigyn would be thrilled if this were all the box contained. (My girl has a definite “thing” for confetti and crinkles.) I’m not as big a fan. Paper tends to catch annoyingly on the helmet.

Oh–I see what this is now! This is a care package, a little “Something-something” to say, “Stay safe in this time of difficulty and pestilence!” All the staff were mailed one. It’s a nice gesture.

Can we pause for a moment and appreciate how the little bottle of sanitizer is of a size compliant with TSA rules for air travel?

Not that anyone can GO anywhere at the moment, but hey, it’s the thought that counts!

Sigyn, we’re standing on something flattish… Get off and let’s see what it is.

Antibacterial wet wipes. Very useful! The Covid may get her, but the human is all set to ward off bubonic plague.

Very much too big.

You wouldn’t know, because–thank the Norns!–the human female’s likeness never sullies this blog, but she really has a tiny little pinhead. There’s no way this one-size-fits-all mask is going to work.

I can hear you now–“Just tie a knot in the elastic earloops and it will fit better!” That might work, if her ears didn’t stick out like taxicab doors, but they do. Any loop small enough to hold a mask securely to her face is going to be strong enough to fold her ear right over and slip off. Trust me, I watched her try. It wasn’t pretty.

So looks like the human male gets another mask, to go with the one he received in his little care package last week.

And that’s it. That’s all there is. I was hoping for cookies or candy, and Sigyn was stumping for stickers, but sadly, it’s just plague supplies.

Bored now. Come on, Sigyn, let’s just leave all the contents for the human female.

And all the packing for the felines.

The humans have snatched the chance to go see the Knittery Friend and her clan in the Big City to the South.  When you’re trying to arrange things to fit six people’s schedules, it can be quite difficult to find a date that suits everyone.  (The baby is isn’t two yet, expressed no opinions, and has no appointments in his  calendar, so he doesn’t count.)

We are taking the opportunity to go to the big museum while we are here.  There is a big exhibit about a famous, fictitious Midgardian detective with preternaturally keen powers of observation. 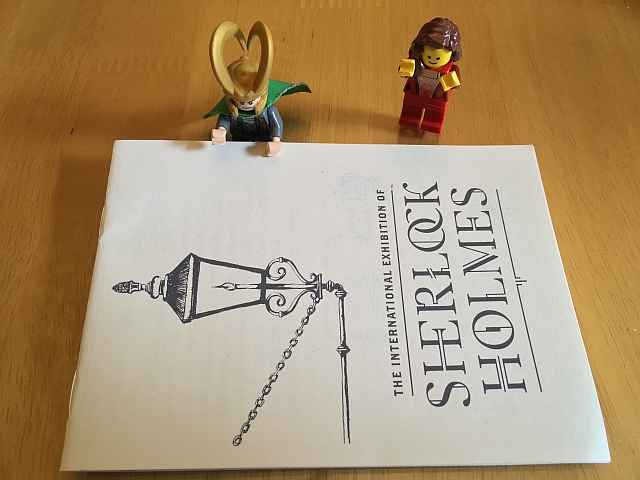 Pfft!  I’m the only one with powers here.

The part of the exhibit about the author, his sources, and his methods is really well done.

Sigyn is a bit squeamish around human skulls, so she is busy reading the old newspapers.

There are little displays about what was cutting edge science in the late 1800’s. There’s a stamp you can collect at every “station.”  Sigyn is tickled because botany is included. 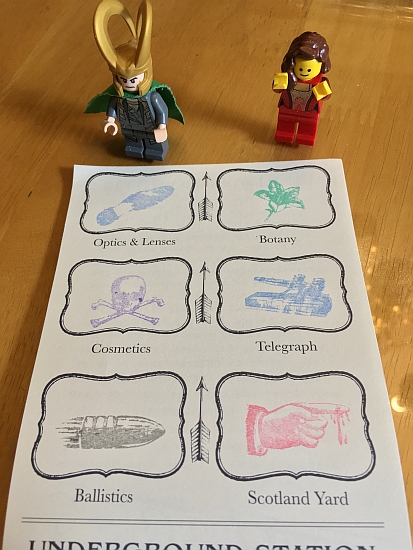 Plus, she loves stamps!  (But why is the “optics” stamp a footprint?)

One of the displays shows how a paper with a pattern of slits cut out of it can be held over a text to reveal a secret message.

Hmm.  That didn’t work awfully well, because the rubbing of brass newspaper article they had out for rubbing came out rather blurry.  And the holes their punching machine made in the paper didn’t line up very well with the text.  That resulted in an extra-cryptic message!

Sigyn thinks the slotty paper’s fun to play with, though.

One room is set up like the great detective’s study, with all sorts of books and props from the stories.  The little notebook has a list of items we’re supposed to find .  The human male has found everything, but how he figured out which of the portraits was Dr.  Beecher, I surely do not know.

Ehehehe!  The “V. R.” is spelled out with bullet holes in the wallpaper.  That’s fun!

Fandral’s mustache!  Sigyn, look, we get to try to solve a case!  The whole second half of the exhibit is set up like a crime scene and a lab.

The crime scene has all sorts of clues–a smashed statue, a fireplace full of burned books,  and drag marks.  A seedpod?   Multiple bodies?  Blood spatter?  This is agreeably spine-tingly, don’t you think, Sigyn?

There’s a seed pod we’re supposed to match with actual plant samples, as well as some demonstration chemical “tests” to determine if the seed pod was toxic or had poison added to it.

Also, the human female, in her usual insufferable way, has found a wrong translation in the Spanish part of one of the chemical  test stations.  And the text of the demo test stations seems to suggest there are two “tests” to do on the plant sample, but after a quarter hour of looking all over the room, it seems there’s only one.  She’s starting to look cranky.

Sigyn is more than a little uncomfortable.  I’d like to go back through and make the machines squirt “blood” all over again, but Sigyn is feeling a bit queasy.  Moving on.

Here we’re supposed to figure out where the bullet must have been shot from to leave a hole in the wall and a spatter of blood on the wallpaper. 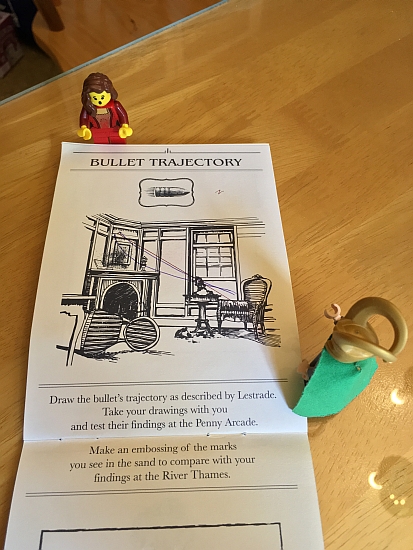 The machines for making comparison drag marks and footprints in a big sand pit is kind of fun.

Sigyn and I agree that some of the marks were footprints, but we don’t think the drag marks came from a body.

At the end of the exhibit are more slot punching machines.  We’re supposed to put the card in the ones that correspond with our interpretation of the evidence and punch out a rectangle, and then put the stencil over a message to reveal the final truth.

Uh, oh, based on the docent telling us that the plant was supposed to be Wisteria, the human female punched the wrong slot.  And then the right one.  We can see the message, and we were mostly correct, but there was a lot of this exhibit that was  misleading or just plain wrong.