Do you see this stuff? 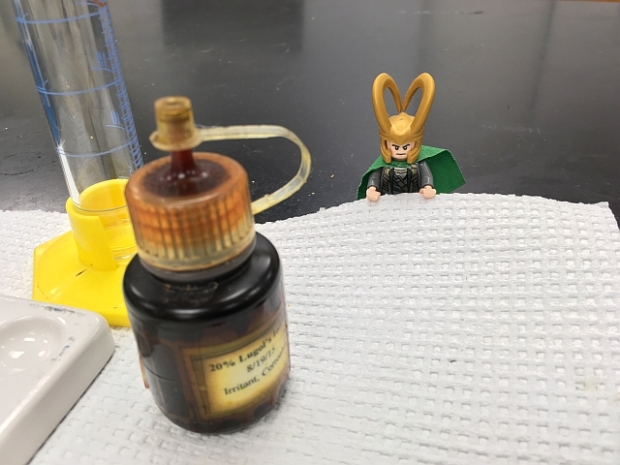 It’s bench paper.  Think of it like a waffley diaper for lab benches.  It sops up any spills, cushions glassware a little bit, and gives students a place to doodle their initials and little hearts and the occasional “biology sux.”  The human female buys rolls and rolls of it every semester—ten lab rooms, three long benches per lab, plus side counters, plus all the prep rooms.

That’s a lot of diapers.

She always orders the same product from the Vendor Who’s Responsible:  six cases of two double rolls each.  This semester, when she plugged the product number (which you’d think she’d have memorized by now, but nooo) into the search box of the website, it brought up several options, one of which was marked “exact match for product xxxxx.”  Usually, that means that something’s been discontinued and what’s tagged is the next best thing.  Dismayed that her usual product wasn’t available, she regretfully ordered six cases of the suggested stuff.

True to form, the Vendor Who’s Responsible had the six big boxes in the stockroom a few days later.  It was immediately apparent, however, that what arrived was NOT in any way like the regular bench diaper.  It was thin and slidey and not waffley at all.  The human female was full of twelve kinds of indignation and fired off a pointy memo to the vendor rep.

And then, looking at the order page again, she realized that the one that said “exact match for product xxxxx” actually WAS product xxxxx, and the product she’d ordered was the next one down the page.

And just how does that crow taste now, mortal?

Shamefaced, she contacted the rep and started pursing a return.  She was hoping to get pre-paid return labels, even though she knew the error was her own and she didn’t DESERVE them.

There followed one of my best efforts at fouling up paperwork.  Messages went back and forth between the human female and the vendor and the rep.  A message was sent with labels as an attachment that got overlooked.  She had to have it pointed out to her.  Labels got printed out and taped on, and all the big, heavy boxes got lugged down to the stockroom for pickup.

Then (and this was a stroke of genius on my part!) someone at the Vendor Who’s Responsible decided that since the human female was pursing a return, what she actually needed was a replacement, so they shipped one more roll of the wrong diapers.  So now she had to try to get them to understand what happened and get ANOTHER return label sent to her.  It came, and that’s when she discovered that the previous six labels had just been address labels and not actual pre-paid freight labels.  She had to request six more of the right sort of label.  They sent them as an attachment, but only five would print, and since each had a separate Unrepentant Package Squashers tracking number, she had to have a sixth.  The Vendor Who’s Responsible had to send the whole shebang over again, then the labels had to get printed out and taken to the stockroom and taped over the old labels.

So, finally, about a month after the initial order, all the boxes went back and the human female could order the right table diapers.  It turns out that the university has a no shipping charges, free returns policy with the Vendor Who’s Responsible, so the human female wasn’t out any actual money.  BUT the chagrin and inconvenience involved were so enormous, and having six enormous boxes taking up all sorts of room while waiting to go back was so annoying, that I’m calling the prank a success anyway.   It was a real WOMBAT.*

I’ll be sure to remind her boss of this next time evaluations come around.

*Waste Of Money, Brains, And Time