I will give the lazy human female one thing.  She is relentless in her pursuit of finding new plants to look at. Today we have packed up the automobile and headed east in search of the fabled Azalea Gardens of Unpronounceable Town Name.The drive so far has been rather scenic, as all the wildflowers are enthusiastically making the most of some warm and sunny weather.  Hence, the trip has been less galling than two hours confined with the human female and her taste in music usually is.  I shall be on my best behavior today, as I am still trying to make it up to Sigyn for forgetting our anniversary.

We have safely reached Unpronounceable, whose name residents generally shorten to “Unp.”  The place seems determined to live up to its sobriquet of “Garden City.”  I am given to understand by the human female that this part of the realm “enjoys a better soil and more consistent rainfall, and is not afflicted with sodium-laden water supply. Bitch, moan, moan.”

Sigyn is enthralled just by what’s planted around the Tourist Information Center.

The human female says this is an Azalea, chief example of That Which Will Not Grow Back Home.  The blossoms are certainly showy.  Are they scented, Sigyn?  No?  Pity.

We have followed the simple directions of the helpful Clerk of Tourist Information and have arrived at the garden devoted to None of This Will Grow Where You Are Living. There are lots of Azaleas.  So many Azaleas.  Bunches upon tons of manies of Azaleas.

By Idunn’s green thumbs!  Bounteous Azaleas are perhaps not a bad thing.

Ordinarily, I would look askance at such bright–one might almost say “garish”– displays, but under the shade of tall pine trees, it is not a punishment to be assaulted by such huge banks of color.

Pink seems to be the most common color, though there are many shades. 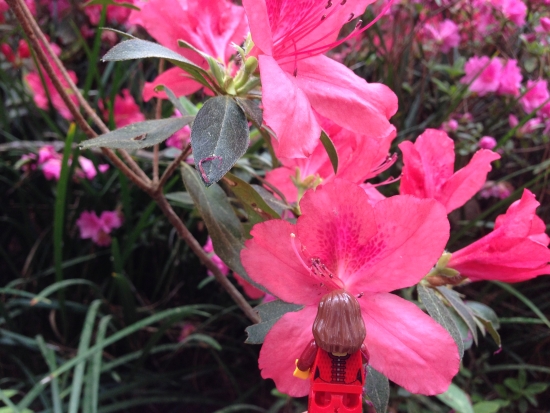 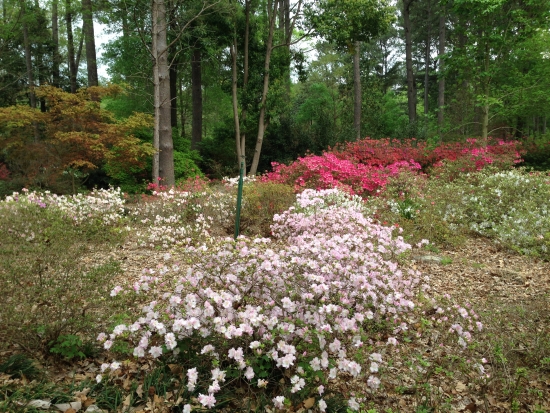 The human male has his camera out, and the female and Sigyn are peering into every blossom. The geeks are happy.

We may be here a while.