It appears that the humans are not going to be doing anything new today.  We had been to the murderous bookstore before, and we are eating at a restaurant at which we have previously dined. The human female is tediously predictable and has ordered the same meal as she had before. The male, however, is eating one bao full of curry and one full of something called “pork katsu.”  The Knittery Friend is having duck…  And of course, we have the fries with the Korean beefy bits.  They are imperative! 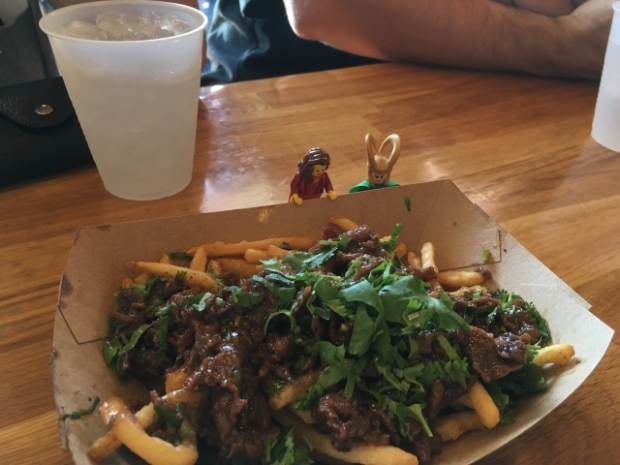 Sigyn just can’t wait to dive right in.  (But then, she likes cilantro more than I do…)  This really is fusion food–aspects of cuisine from various parts of Midgard.  I wonder what Midgardian-Asgardian fusion food would be like?  Probably awful–roast venison with peanut butter.  Mead-and-ice cream floats.  <shudder>  Let us contemplate this no further.

Dessert!  We have not had dessert here before, but the Knittery Friend has ordered some.  What on Midgard is this? 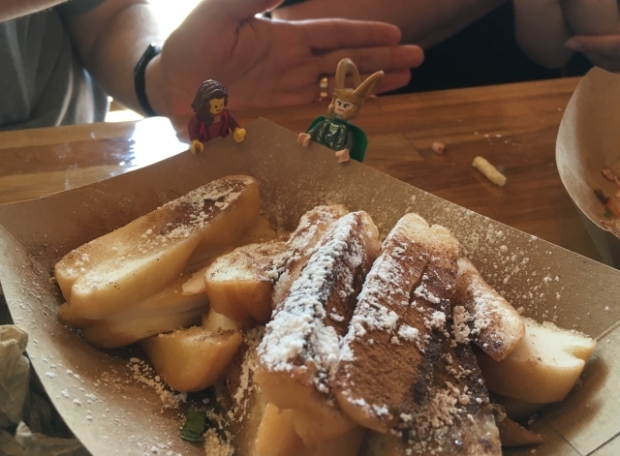 Nibble, nibble, NOM NOM NOM.  This is the same poofy dough, fried and drizzle-dusted with honey, cinnamon, and sugar.  And something vaguely salty, which makes me want to eat the entire order.  The way the human female is shoveling them in, though–I’m going to have to fight her for them!

Time to waddle to our next destination.   By Thor’s hefty hangovers!  What vile apparition is this?  I have not imbibed a drop today, but I seem to be having hallucinations nonetheless. Preposterous pink pachyderms!  No! Sigyn!  Come back–it can’t possibly be safe. 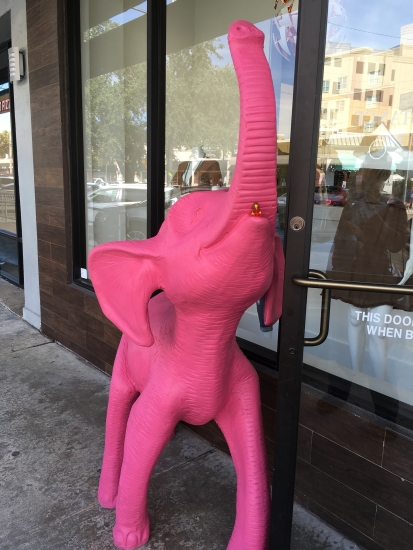 Yes, I see now that it is street “art.”  No, I will not sit on it with you. It is beneath my dignity.  This one’s all yours.