The humans have had to run to the Big City to the West for some churchy event or other.  Sigyn was excited, whatever it was.  I didn’t want to know–I’ve just tagged along to see that Sigyn comes to no harm.  At any rate, the humans dragged a few friends along, the churchy event is over, and one of the friends has produced yet another friend, and  now suddenly I find myself in a very odd restaurant, squeezed into a booth with three people I don’t know and two people I only tolerate, contemplating some very peculiar lunch options.

The whole place is very highly mechanized.  A conveyor belt of sorts snakes all around the establishment, laden with small plates of tidbits, mostly of the raw fish variety. 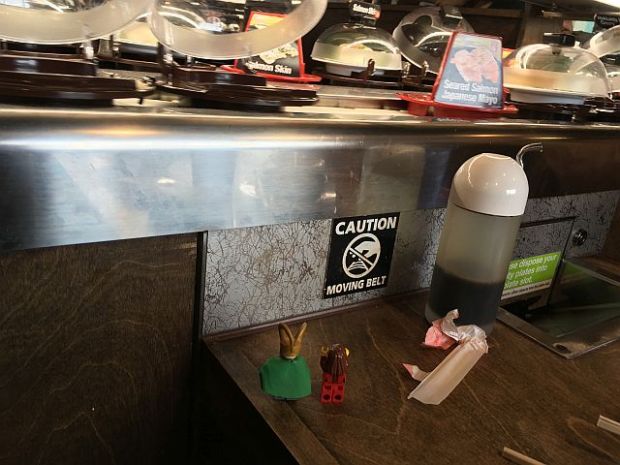 A plate with a placard announces each new set of arrivals.  One simply reaches out and takes whatever plate one wishes as it trundles by.  The computer by each table registers what has been selected.  Very clever, these Midgardians!

No, Sigyn, you may not ride the belt just to see where it goes.

The human female has selected some round, seedy…things. 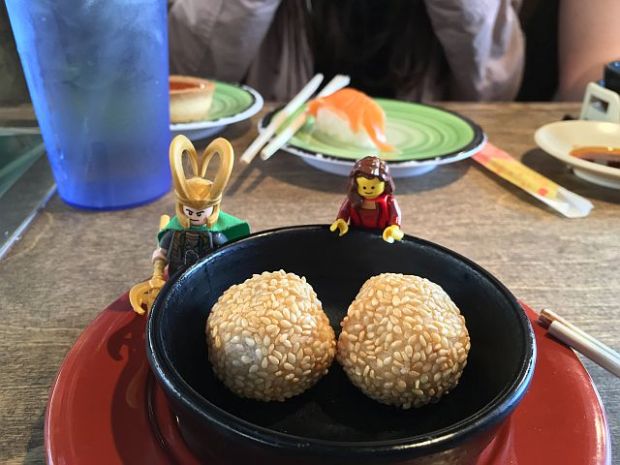 There were three in the bowl, but the human female has already inhaled one of them.  That leaves two, Sigyn, one for each of us. (poke, poke, poke) Now I remember!  They’re filled with sweet and beany goo, and we like them!

It’s not the warmest day outside, so we have ordered some hot ramen soup from the table’s computer menu.  It arrived on a separate little swift conveyor and stopped neatly at the table.  No soup on the main conveyor, because someone else might take it.  Would people really do that?   Take someone else’s food?  Well, I would, but that’s how I work.

Chicken, egg, onion, noodles, broth.  If it is true what they say, that fat= flavor, it is probably going to be delicious!

We still have room for….Dumplings! 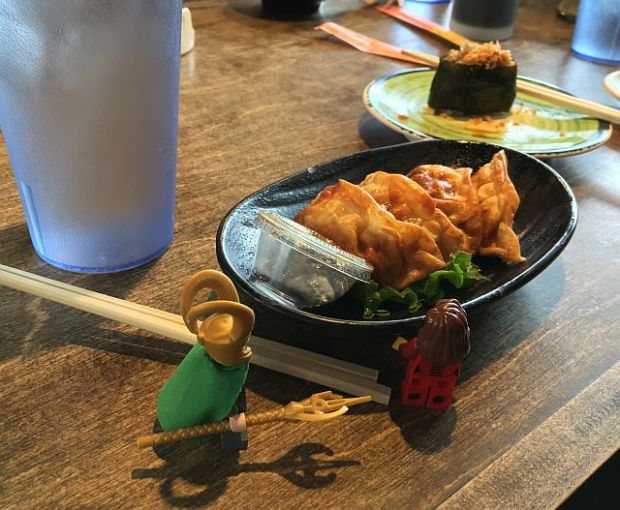 Dumplings are always a good idea.   This sushi “donut”, on the other hand…

…can call itself dessert all it likes.  It’s still raw fish.  I think some of it is salmon, which means I should definitely see that the human female has some.  I want to see that funny, itchy rash it gives her that I’ve heard so much about.

Come on, just one little bite?