The human female is back at work on the quilt.  A quilt is more than just the sewn-together pieces of the top, you know.  There’s the backing to consider, and the batting.  Batting is so important.  The human female is very, very picky.  She has been to two shops, looking for just what she wants.  (The craft room, as stuffed with stash as it is, apparently does not contain the Perfect Batt.  There IS one in there, butt it’s queen size, and it seems wasteful to cut a baby quilt out of it.)  She doesn’t want wool, as wool dissolves in Oxy-type cleaners and hello—baby quilt, with all the spit-up and leaky diapers that entails. She doesn’t want some weird, off-brand that she’s never heard of, because who knows how that will “needle?”  Some of the cottons are too thick for anything but machine quilting, so they are out.  No, it must be polyester.  Ah!  She has found a display with batts that fit her fussy standards.

Here is the purchased Chosen One, ready to spread out and layer.

Of course, she has not discovered this unfortunate fact until too late in the evening to go back to the store and buy one that is large enough.  However, rootling around in the stash like a desperate piglet has turned up a throw-sized batt that someone gave her once.  It’s not precisely what she would have chosen, but it will have to do.

(later.)  The “quilt sandwich” is all basted with safety pins in the middle (I was not allowed to help for some reason) and with thread round the edges.  It is ready for quilting!  Except for this bit:

Looks fine on top, doesn’t it?  Yes, indeed!  But on the back, a great lumpy fold of backing has been caught in the basting.  I wonder if she’ll notice before she quilts it into the finished product?

The quilt is now laid out on the ironing board, set low in front of the sofa, ready for stitches.  Time to find the quilting thread!   The human female is “pretty sure” she has a spool or three left from the last project.  Come, Sigyn, let us help her look.  Stick close to me, though–the craft room can be a scary place! 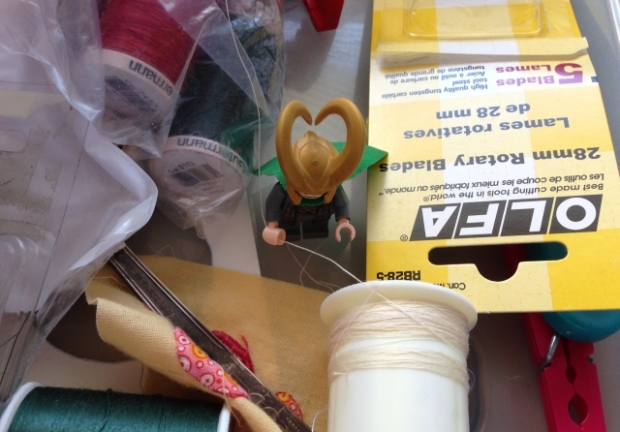 This is the right color, but it isn’t quilting thread.

This baglet is full of quilting thread, but it’s all the wrong color.

Sigyn likes it, though!  Oh, well, perhaps the right thread will turn up eventually.  Or she can buy a fourth spool..

While we are in here, we should look for the quilting needles.

(much fruitless searching through two boxes of quilting supplies and two sewing boxes later)   She has found them!  And the thread as well!

These are called “betweens.”  Between what?  The sofa cushions–what else!