A cold front blew through between Tuesday night and Wednesday, bringing bright, breezy fall weather. Today it is eleven kinds of windy. The human female, undeterred by the sheer tonnage of ragweed and sumpweed pollen in the air, has dragged us all out to Lick Creek Park to take advantage of the non-sweltering weather.

With all of this wind, the likelihood of good plant photographs in focus is small, but the humans both have their cameras with them anyhow. Let the blurry photos commence!

The pink muhly grass by the nature center is whipping about in a very graceful manner.

The one the human female has planted in front of the house isn’t as big or as pink, but it is trying.

We are seeing quite a bit of the formerly-a-mystery white bidens in the Great Desolation. We managed to catch some of it in focus.

The asters not so much.

While the human female is bigger than she should be, she is still not large enough to make an effective windbreak to keep the plants still so that the male can photograph them. Hence, images like this weirdly-out-of-season black-eyed susan:

Real prize-winner, that one.

The human female says she hasn’t been down Raccoon Run trail in a few years, so that’s where we’re going. It appears to have been widened, but it’s still rather pretty. There are a fair number of large hickories and a lot of frostweed in flower.

The sun is shining though the sumac leaves.

There are some unusual plants along this trail. I didn’t recognize this one at first,

and I didn’t believe her when the human female said it was a palm tree. Palms? In the forest? But yes, this is the native sabal palmetto, and this is about as big as they get.

The stem or trunk is underground. Up close, I can see that the leaves really are pleated like a paper fan.

Some of the trees down here in the bottomland are just festooned with this gray stuff.

The human female says it is an epiphytic bromeliad that likes to live on trees so it can be up in the sun and humid air, which sounds plausible. She also says it is a relative of pineapple and has little green flowers, which sounds entirely bogus. (I never believe more than half of what she says, anyway.)

Shhh! Sigyn, did you hear that? It sounded like a tiny little shriek. There it is again! It’s coming from that thick vegetation right over there. The human female says it’s a small frog in distress. Given that the human male just saw the back half of a snake disappear into the same clump of foliage, I suspect what we’re hearing is the batrachian version of, “Oh, no! Don’t eat me! Help!”, but I’m just going to tell Sigyn that it’s two local creatures meeting for lunch, which is perfectly true.

They look like little yellow tomatoes and are the fruit of one of the native nightshades. Hmm. Salad for dinner some time this week, I think. The human female had better not lose another of my helmets out here in the woods or she will find some in her serving.

Unfortunately, there is an awful lot of non-native vegetation in this part of the park as well. Chinaberry, ligustrum, Japanese honeysuckle, and Chinese tallow tree are the main ne’er-do-wells. The human female is snapping saplings and hauling down vines and resolving to come out again with a) help, b) a saw, c) clippers, d) some brush killer for painting stumps, and e) some napalm. Okay, that last was my addition to the game plan, but you must admit, it sounds like fun!

What have you discovered over there, my love?

It’s like she has a little baldacchino! (You can look that up later.)

Looks like we are headed back to the vehicle now, having made the complete loop–without, I point out, seeing a single raccoon. I feel cheated and shall be complaining to the management at the first opportunity.

Odin’s Eyepatch! The human female just fell down! One minute she was walking and the next, BOOM! I don’t know if she rolled an ankle or if a rock moved under her foot, but here she is, splat on the trail with her limbs waving like a cockroach in its death throes. The male is helping her up, and I don’t see blood (though I bet that knee is skinned under those jeans), so presumably she is mostly all right. Who knows? It might just be a pitiful bid for attention. Let us continue!

Hold! There is something odd in the path up ahead (and I am not talking about the toddler making a puddle, though that is outside the normal realm of goings-on). Sigyn, do you see?

I do hope he’s not on his way to have lunch with his cousin down on the loop trail. If he is, I fear he shall find his kinsman…unavailable.

I know that I always grumble about having to accompany Sigyn on these botanical walkabouts, but I usually do end up seeing something interesting or even beautiful.  (Sigyn is always the most beautiful sight, but some of the plants are nice too.) 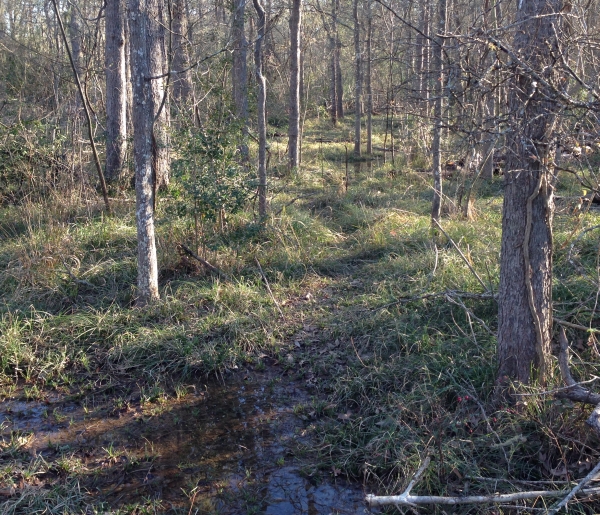 It’s good to see the sedge meadow all squishy and wet.  It’s bottomland woods, so it’s meant to be that way.  We’re not wearing rubber boots today, so we will have to admire it from here.  Come summer, it’ll be a marvel of dappled green shade.

Sigyn, what have you found?  A little leftover bit of fall color?

Be careful, Sigyn–it’s that prickly greenbriar stuff.  Do you know, usually I hate the color orange, but that one leaf is just glowing like a citrine.  Or a citrus.  One of those.

Ah.  This must be the scratch-and-sniff portion of the walk.  The human female is rattling on about glands and aromatic oils and how this wax myrtle is related to bayberry and blah blah blah.  I just know that it smells good. 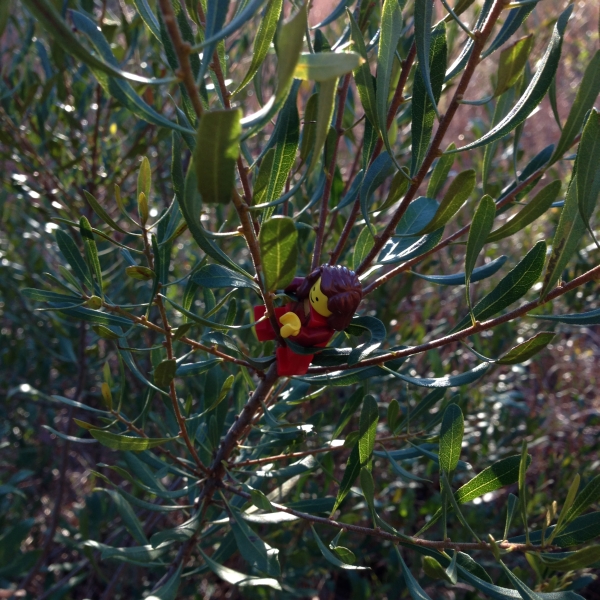 I think that Sigyn is gathering some leaves to make into a sachet.  It’s not too “girly” a scent, so I’ve no complaint.

I may pick a few of these lichens to take home.  Just look at all the wonderful shapes and textures.  Lichens are very underrated.

Oh, now this is a real treasure.  Sigyn likes the flowers (they’re late), even though they’re a scruffy, dirty white.

I’ve actually been reading up on this plant.  Its name–frostweed–intrigued me.  Apparently, if there’s a cold snap while the stems are still green, the stems rupture and the sap oozes out, freezing as it does so.  The result is a delicate ice “flower” that lasts only as long as the freezing temperatures.  You’d have to be in the right place at the right time to see it.  Sigyn, if we ever get a hard freeze this winter, we should come back out to see if we can catch it.  Or if the human would just wander off and look at something else, I could zap this one…

We’ve been hiking for an hour or more, and it is just about time for the human female to think about going home and making us some dinner.  (I am a god; I do not cook.)  But before we trek back to the vehicle, we should take a little rest, and here is the perfect spot.

Better idea:  Human, you heave yourself up, slog back to the car, go home, and cook dinner.   Call me when it’s ready and my sweetie and I will teleport home from  here.