I have noticed A Thing on my walks around the neighborhood with Sigyn and the human female: there are a LOT of vines around here. I haven’t figured out whether it’s that people really like to plant them or whether their oft-aggressive nature means they can out-compete frailer foliage when subjected to the crummy soil and wretched water which this city “enjoys.” In any case, they roil over fences from people’s back yards and swag the trees far and wide, so they’re not hard to spot.

We have been keeping an eye on the peppervine all summer long.

This is the one with the divided leaves. They can be red on new growth, which Sigyn certainly approves of!

(That’s a grapevine on the left, and the white flowers belong to something else entirely.)

The fruit are ripening well about now.

I never see them without wanting to drop their blue-black lustrousness into the human female’s blueberry supply, just to see if she notices.

Trumpet creeper is very common. It’s originally native, but it has been adopted by gardeners everywhere because you cannot kill it.

Greatly loved by hummingbirds and Sigyns, it’s an extremely vigorous plant. It clings with little sticky suckers and can smother anything stationary. Hear that, human female? Treat me right, or I will plant one next to your chair.

It also comes in Sigyn’s other favorite color.

This next one is new one for me. It has white flowers and clusters of fluffy things.

The human says it something called Clematis and that the really showy-flowered varieties do not do well here—too hot. She thinks this is probably one of the native species. The furry tailed things are the fruits (achenes.) Not that I care.

Apparently, this one climbs by twining the midribs of its compound leaves around things. Again, not that I care. The human female is once more showing off her store of botanical trivia and I just let it flow right past me. I’m not sure Sigyn is listening either. I think she’s just enjoying the dangling.

I don’t think we’ve run into this Treebine or Sorrelvine before, either.

The leaves are thick and feel rubbery. They have a horrific stench about them, too. Phew! Do you see any fruits, Sigyn? I think we need to plant some of this in the human female’s flower bed…

Another new one! The human female was stumped for a bit, but the leaf shape and the presence of small, brown, aerial tubers gave this Air Potato away.

(sniff) What does that aroma remind you of, my sweet? I know I’ve smelled it before, but I can’t place it.

This is Carolina Snailseed, and it looks rather like the plant above.

The human female is intimately familiar with it. There are separate male and female plants, and the lady plants have bright red berries in the fall. The human female planted a few seeds, hoping for girl plants, but I made sure that she only got male plants. They spread readily by underground stems and have tried to take over the entire lot and never a berry to be seen. She pulls it up by the handful, cursing all the while. It’s excessively amusing.

Half of all of these plants just look like grapevines to me. And there are several local species of grape, so actual grapeness is not out of the question. See? Here’s one!

Be careful, my love. Is your grip as secure as it should be?

And, finally, we have this lovely Macartney Rose.

This is not to be confused with the hybrid tea The McCartney Rose TM:

The former is a horrible, invasive pest that has taken over acres and acres of open, disturbed ground in the southern part of this realm. The latter is a fragrant, pink-flowered, well-behaved sweetheart of a plant named for a sort of musical insect.

Guess which one I’m going to plant in the human female’s yard?

Every year about this time, the wild, high-climbing grape vine in the backyard makes a lot of big, black grapes that the lazy local wildlife can’t be bothered to eat.

I can’t say that I blame them.  It is far too hot and humid to want to climb trees in search of grapes that, while they have a sweet pulp, have some of the thickest,  most astringent peel known in all of grapedom.

The result is that most of this viniferous abundance just drops off the vines and collects on the pavement.  The car, on the rare occasions we drive anywhere, just makes what I call “driveway jam.” 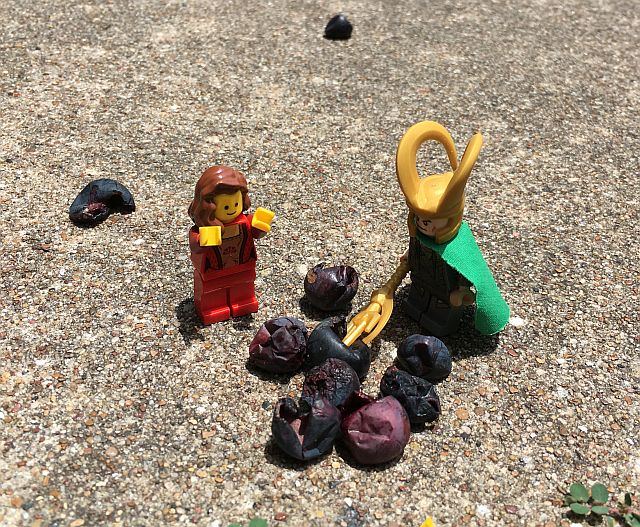 Poke, poke, poke.  Even if I can reach them now, I don’t really want to eat them, but there has to be something useful to do with them.

If the human female had a package of black table grapes in the cooling box, I’d sneak some of these wild ones in among them, just to watch her face.

Hmm.  Maybe I can make her a puckery little surprise and leave it in the freezer…

We are still hanging around here at Maybe-Mint-But-No-Actual-Spring.  The human female is itching and scratching because she didn’t want to goop up with bug repellent for what she thought would be a short trip.  She’s getting good and bitten up and, since she is physically incapable of not scratching, I predict that that  one on her neck will be roughly the size of a prize-winning goiter by tomorrow.

You’ll notice I said “hanging.”  I mean that in the literal, dangling-from-stationary-objects sense.

Looks like a good crop of grapes this year.  We shall have to come back when they’re ripe and watch the human female make horrible faces as she tries to eat them.  (I know better than to try to eat them with the skin on, but she isn’t very bright and foolishly tries one every couple of years, just to see if still tastes awful.  Hint:  it does.) 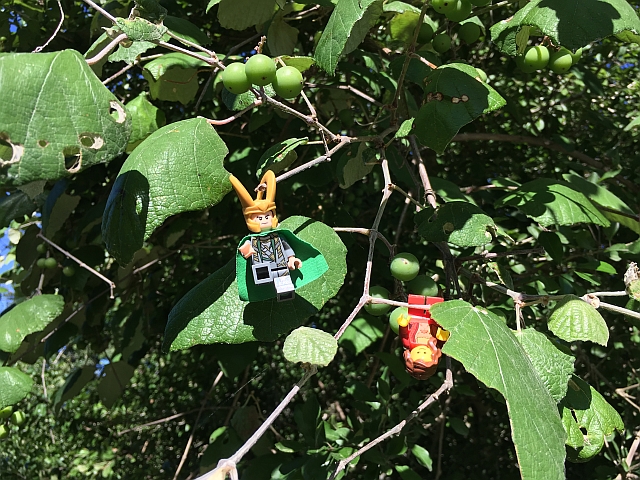 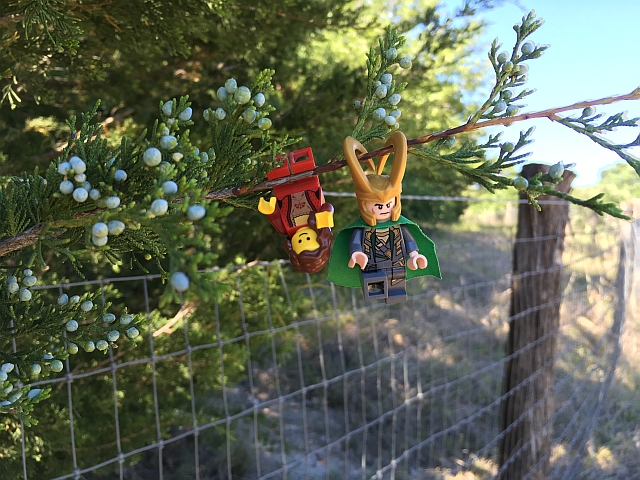 I’ve yet to see the human female try to eat a juniper “berry,” but I wouldn’t put it past her.  Hmm…  I shall have to ponder how I can bring such a thing about.

It’s not only woody plants that are good for dangling. 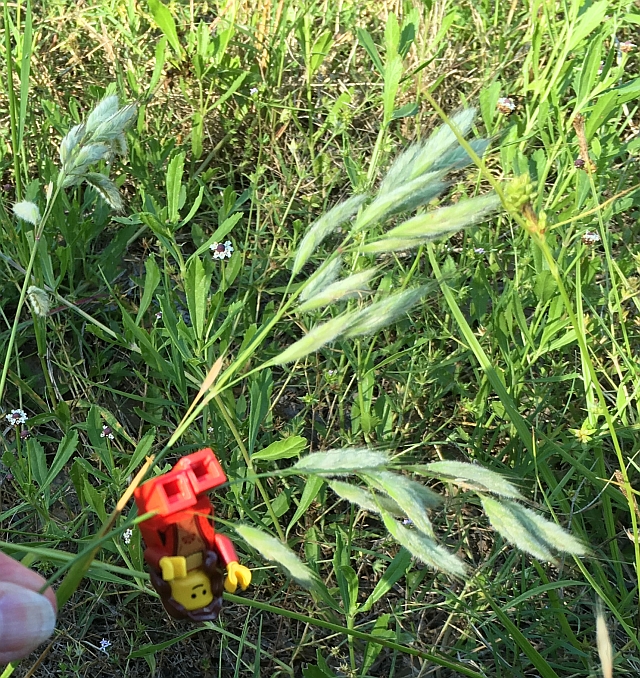 She’s had to enlist the human female’s help because the stems are so thin, but once up there, Sigyn has found that this very fuzzy brome grass has a satisfying sway to it, especially on a breezy day.  Yes, Sigyn, those fuzzy spikelets would make good pets.  Of course you can bring one home if you like!  Bring three or four and I will put some in the human female’s socks.

In addition to the hanging about and mosquito-slapping, there is a good deal of clambering happening here today.

This is old plainsman, or woolly-white. 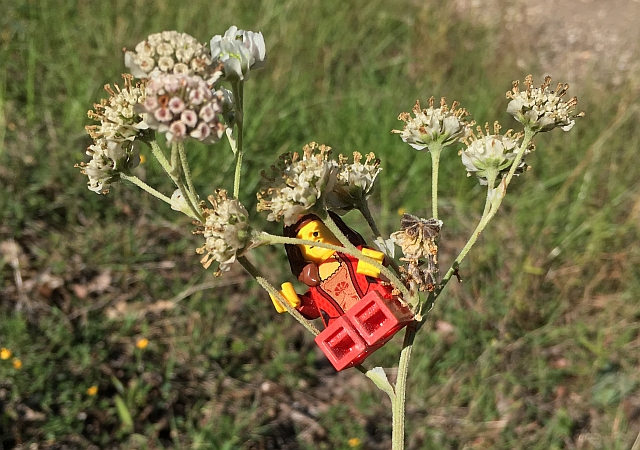 Then there’s this yellow thing.  Its name, the human female says, was recently changed from Engelmannia pinnatifida (which at least described the shape of the leaves) to Engelmannia peristenia, a move which has proven to delight absolutely no one.

This plant is named after a botanist with such poor handwriting that his labels have been databased as Eugelmuuu, Engelnuuu, Euglenumu, and various other permutations.  Cursive is such a stupid idea.  Jotuns and Asgardians both use runes and trust me, we don’t have such orthographic abominations.

This is such a backwards planet.